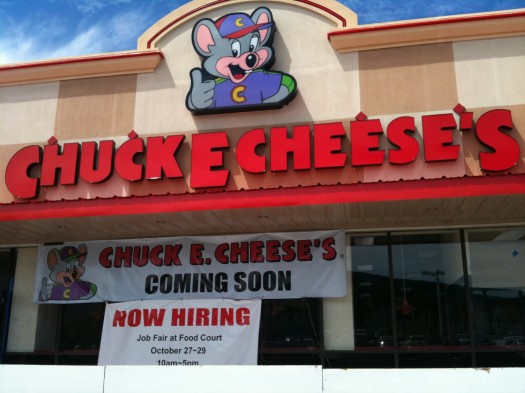 The Guam PDN recently published an article about USN Rear Admiral Bushong’s recent talk at the Guam Rotary Club. The Admiral noted the recent increase in anti-militarist sentiment on the island, and exhorted the nice folks of Guam to ‘tone down the rhetoric a bit’. After all, he said, military personnel on Guam take their kids to Chuck E. Cheese & hang out with the locals. “We love it here,” he said. The military and the local community are just one big happy family. So why was everyone so upset?

I read this article and my first thought was – duh – you guys have taken over a third of the island! You’ve taken the water, you’re threatening to dredge 70 acres of coral reef, and you want to take over one of the last holy places left on the island and turn it into a live firing range. You don’t shop with the locals, you don’t send your kids to schools with the locals – because you’ve drained all their resources and those shops and schools are now sub-standard. You’ve treated the local government like a nuisance, rather than incorporating them into the decision-making process. You issued an 11,000 page document outlining your drastic plans for the island, and gave the public only 90 days to read it and respond. When the EPA told you your ideas were unsatisfactory (i.e. toxic, unfair, unsustainable, and illegal), you just came back again with the same bad ideas. If you pulled that kind of thing in California, you’d have a US Senator breathing down your neck before you could say ‘pass the finadene’.

But my next thought was: Good. This means the Navy is starting to get concerned that they might not be able to just ram through their stupid ideas this time. The rest of the American media might not be paying much attention to Guam, but at least the DoD is picking up on the fact that the natives appear to be getting a wee bit restless.

And then – to my delight – I received word of two responses to the Admiral’s talk from the restless natives themselves: Dr. Desiree Taimanglo, who has a doctorate in rhetoric, wrote a scathing reply in her blog, The Drowning Mermaid. She clearly articulated the widespread undercurrent of resentment on Guam, of which the Admiral seems to blithely unaware. She also quoted another response, this one from Chamorro poet Craig Santos Perez. Since I haven’t been able to find Dr. Santos Perez’s brilliant riposte anywhere else online, I will repost (reriposte?) it here – hoping that the honorable poet will graciously allow me the honor of sharing his work.

(Note: for those of you not familiar with Chamorro folklore – Juan Malo is an archetypal figure in Chamorro folk tales, a prankster who often plays tricks on Guam’s Spanish colonial officers. Santos Perez’s revival of Juan Malo under these circumstances is both apt and brilliant.)

“If you know the enemy and know yourself you need not fear the results of a hundred battles.”–Sun Tzu

There’s no reason for the colonized of Guahan and their colonizers to be enemies, according to a low-ranking poet from Guahan.

Really amicable Juan Malo, author of The Tales of Juan Malo & Other Poems, said the island’s colonizer and colonized population together make up the island community.

“Many of us have been colonized multiple times on Guahan and we stay by choice because we love being colonized here,” he told the Rosarians during a “Rosary Club of Central Guam Canned Meat Luncheon” held yesterday at the Outrigger Resort and Spa.

Malo, who was the unpaid guest poet at the event, said he’s heard worries about the colonization of the island and hears gossip that sends a combative postcard between the colonizers and the colonized.

“I don’t even notice it anymore. The colonizers on Guahan are the people sitting next to you at mass on Sunday, taking their whole clan to Shirley’s for a big occasion, selling their ‘insurance,’ or buying an Asian Settler food plate in Chamorro village on Wednesday night,” he said.

Malo said around January 2010, which was when the colonized were overwhelmed by the 11,000 page guidebook How to Colonize Guam Even More, several colonizers beat the tip of their spears in Tumon outside a massage parlor.

“The last Governor of Guam and the new Governor both talked to me about this,…they were very gossipy,” Malo said. “I think the masterbatings were a result of the inadvertent message that the colonized want them to come here. Even though this message was perpetrated by only a few, the colonizers are going to come anyways.”

And every day, gossip and petitions and testimonies are sent to our Uncles within the Defense Department and the United Nations, Malo said.

The rare poet didn’t specify where the gossip surfaced. However, local support groups for the colonized, supported by several of their ancestors, have often spoken negatively on the colonizer’s plan.

“My concern is that the gossip will not stop the colonizer’s devastation in Guam,” Malo said. “It would be helpful to our survival if they toned down the colonizing a bit or at least offered us a measure of self-determination.”