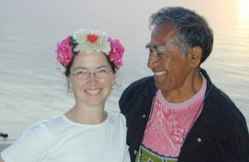 When I began this film in 2001, I knew there were American overseas territories, but I didn’t know a thing about them. And that bugged me. How could there be places that were part of America, but weren’t states? The more I thought about it, the more questions I had. Who lived there? Were they Americans? If so – why weren’t they states?

I decided to do some research, and to go visit. I brought with me a video camera, and a friend who was studying the history of imperialism and globalization. I came to love the Marianas — but from a mainland perspective, it was truly a strange place.

After a 24 hour flight from California, via Japan, we were met by US immigration, warm smiles, and blasting tropical heat. Next to the airport, American B-52 bombers roared over turquoise lagoons. World War II tanks were still rusting near the beach. American chain stores overrun with Japanese tourists sprawled next to Chinese garment factories, third-world slums, and huge luxury hotels at the edge of raw jungle. And everywhere I went I felt the presence of the US military.

I visited Guam and the Commonwealth of the Northern Mariana Islands (CNMI) two more times over the next three years, earning the trust of the islands’ indigenous communities and learning about their complicated relationship with America. The islanders are a proud people, who survived over four hundred years of colonization, and then gave everything they had to the United States – in return for the promise of freedom and democracy. But the more I looked, the more that promise appeared to be hollow.

The Marianas have sent soldiers to fight America’s wars for generations, and today, the young men and women of these islands are leaving to fight again for the US – this time in Afghanistan and Iraq. Pretty much everyone I met had a family member serving in the US military, and the islands are sending soldiers to die for America at a rate four times higher than any state in the union. Yet, as residents of ‘insular areas’, these soldiers have no vote for their commander-in-chief, and no voting representation in the country whose flag they die for.

And it’s not just their young men and women who are being sacrificed: when I began filming, the US military had taken over two-thirds of the island of Tinian, and over one-third of the island of Guam, mostly without fair compensation. The people of the Marianas are used to an American military presence in their homeland, and despite their lack of representation and influence, the people of the Marianas have been astoundingly gracious about it. But today they are facing an unprecedented invasion, as the US plans a massive military buildup of the Marianas. The buildup will increase Guam’s population by over 30%, taxing the island’s already strained natural and community resources to the breaking point.

With so much at stake for the islands, The Insular Empire: America in the Mariana Islands comes at a critical time. To put pressure on the US to bring true democracy to the Marianas, it is imperative that the average American, and the rest of the global community, understand what America is doing there.

My challenge has been to tell the complicated story of the Marianas – involving fifteen islands, five centuries of colonial rule, four empires, and two indigenous cultures – while also conveying the pathos of their current, ongoing relationship with America on a personal level. I decided that, in order to make a mainland audience really feel for the islands, the film had to focus on a few characters: to get inside their heads, to understand their internal conflicts and the external circumstances that have shaped them and their islands.

I settled on four people, who have all been extremely brave and generous in sharing their stories with me on camera. Each of them has been intimately involved in creating – or resisting – the Marianas’ current relationship with the US, and they represent different aspects of what I like to think of as the islanders’ collective psyche: the loyalty, resentment, confusion, longing, determination, resistance, and pride that coexist in some measure in virtually every Mariana Islander I have met since that first trip back in 2001. With their stories, I have tried to create a film about these complex and patriotic people, and to help shed some light on America’s ongoing imperial role in the Pacific.

– Vanessa Warheit
p.s. Feel free to email me with your questions or comments!